Lady Margaret School has its origins in Whitelands College School which was founded in 1842. In 1917, the original school was threatened with closure, and it was only by the strenuous efforts of Miss Enid Moberly Bell, and the staff of the school, that a substantial number of the students were ‘rescued’ and it became Lady Margaret School in September of that same year. Miss Moberly Bell remained Headteacher for the next 30 years.

Progress in the interwar period 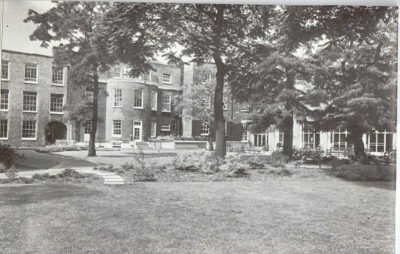 The school takes its name from Lady Margaret Beaufort (1443 – 1509) the mother of Henry VII, hence the choice of the Tudor Rose as the school’s emblem. Lady Margaret Beaufort was founder of St John’s and Christ’s Colleges, Cambridge. Lady Margaret Hall, the first women’s college at Oxford University is also named after her. Miss Phillips, a member of staff and particular friend of Miss Moberly Bell, as an alumna of Lady Margaret Hall, is believed to have suggested the name. The school began life in Belfield House, the oldest of the three houses which now form the present school. Within 10 years pupil numbers had grown to 250 and Sir Valentine Chirol presented the school with its first purpose-built classrooms.

In 1937, the second house, Elm House, was purchased through the generosity of Miss Anne Lupton. No sooner had the new accommodation been arranged than war broke out and the school, with most of its students, evacuated to Midhurst in Kent.

The school re-opened in Parsons Green in 1943 with reduced numbers, but by 1944 there were 223 pupils. With the passing of the 1944 Butler Act – two of Rab Butler’s granddaughters would later become students of the school in the 1970s – the Kindergarten and Junior School were phased out. The school leaving age was raised to 15 in 1947 and Lady Margaret became a two-form entry grammar school under the leadership of Miss Florence Elsie Marshall (1947-71). Pressure on space was once again relieved by the purchase of a third Georgian house, Henniker House, in 1951 and named by London County Council in memory of Jane Livesey Henniker, the first woman member of Fulham Board of Guardians.

In April 1951 its relationship to the Church of England was regularised when it became a Voluntary Aided school.

The acquisition of Henniker House made it possible for plans for a new hall and gymnasium, first mentioned before the war, to go ahead. Twelve years elapsed before this became a reality, and HRH Princess Alexandra of Kent formally opened the hall in 1965.

Transition to a comprehensive school

The school’s third Headteacher Miss Alison Cavendish (1971-1980) oversaw the consideration of various schemes to reshape the school, as grammar schools were phased out in favour of comprehensives. After lengthy consultation and discussion, the school retained its original identity and accepted its first comprehensive intake in September 1977 – the school’s  60th anniversary.

Rosemary Cairns was Headteacher for four years before moving to Burlington Danes in 1984, when her long-serving deputy Mrs Joan Olivier (1984- 2006), became the school’s fifth Headteacher. This period witnessed the rejuvenation of a shrinking Sixth Form, the introduction of GCSEs and the National Curriculum, and in 1990, with the demise of the ILEA, the school became the responsibility of the borough of Hammersmith and Fulham.

The new technology extension (known as B Block) was begun in January 1994, completed only nine months later and formally opened by the Secretary of State for Education, Gillian Shephard in October that year.

The New Block (known as C Block) was started two years later and completed at the end of March 1997. In the Summer Term of 1997 Elm and Belfield houses were remodelled and the new library created.

Joan Olivier retired in 2006 and was succeeded by Mrs Sally Whyte. Owing to the long and distinguished service of Mrs Olivier, who did so much to establish the high reputation of Lady Margaret School, the new building, opened in September 2010 to accommodate the expansion of the school Sixth Form was named The Olivier Centre. Moreover, the equally significant contribution of her genuinely outstanding deputy, Colin Busby MBE, who served the school with tireless dedication for 21 years, was recognised with the naming of the Busby Auditorium in The Olivier Centre.

In September 2012 and with 725 pupils on roll, the school was awarded academy status. Later the following year it was authorised by Hammersmith & Fulham Council to expand from three to four forms of entry so that more girls could enjoy the benefits of the distinctive Lady Margaret education.

The permanent expansion (after two ‘bulge’ years) to four forms of entry took place as planned in September 2014. A new entrance, straight onto Parsons Green, providing improved access and enhanced internal space opened in 2015 and was the final phase in this improvement project.

Mrs Sally Whyte retired in July 2015 after nine years as Headteacher and was succeeded by Ms Elisabeth Stevenson who became the school’s seventh Headteacher.

In 2017-18 the school celebrated its Centenary with a range of events inside and outside the school.

This website uses cookies to improve your experience while you navigate through the website. Out of these, the cookies that are categorized as necessary are stored on your browser as they are essential for the working of basic functionalities of the website. We also use third-party cookies that help us analyze and understand how you use this website. These cookies will be stored in your browser only with your consent. You also have the option to opt-out of these cookies. But opting out of some of these cookies may affect your browsing experience.
Necessary Always Enabled
Necessary cookies are absolutely essential for the website to function properly. These cookies ensure basic functionalities and security features of the website, anonymously.
Functional
Functional cookies help to perform certain functionalities like sharing the content of the website on social media platforms, collect feedbacks, and other third-party features.
Performance
Performance cookies are used to understand and analyze the key performance indexes of the website which helps in delivering a better user experience for the visitors.
Analytics
Analytical cookies are used to understand how visitors interact with the website. These cookies help provide information on metrics the number of visitors, bounce rate, traffic source, etc.
Advertisement
Advertisement cookies are used to provide visitors with relevant ads and marketing campaigns. These cookies track visitors across websites and collect information to provide customized ads.
Others
Other uncategorized cookies are those that are being analyzed and have not been classified into a category as yet.
SAVE & ACCEPT
Powered by